Details of 2022 Games can be found in the News Section

A hotly contested series of games were played on Tuesday, 1st June at Watford's grounds.  Basked in glorious sunshine it was pretty much neck and neck all day with each team winning the opening doubles and so it was until the final match.    Ultimately Watford won 10-8 but Enfield East did the Club proud.  Captained by Frances Broadway, the team was Nicola Hyde, Ian Moore and Kim Taylor. 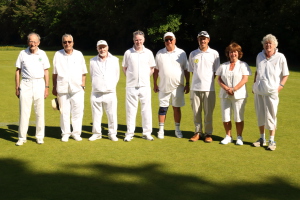 An all-home match with Enfield West playing Enfield East was held on Friday, 28th May between Enfield East and Enfield West. For those new to the game, the Club enters two teams in this event captained respectively by David Frost and Frances Broadway - it's a real local Derby! Each team consists of four players with a combined handicap of 20. Five games were played by each of the players - one doubles and four singles. Enfield East were the overall winners (13-5).

Enfield's B Level GC team beat Letchworth 11-7 on Friday, 3rd June in a match where it only stopped raining for a very short while during the lunch break.

The doubles were shared 1-1 with both matches going to Golden Hoop, the first singles round was key to the match with Brian Dawes, David Barnicoat, Kim Taylor and Ian Moore all winning their games to give Enfield a 5-1 lead. This lead was then held throughout the match with all the other singles rounds being shared at 2 games each. 9 of todays games went to final hoop which is a reasonable indication of how tight the games were. Special mention for Ian for whom this was his Inter-Club Level play debut. Singles wins Brian 3, Kim 3, David B 2 and Ian 2. David & Kim won their doubles game.