Earlier this year, one of our Club members Thomas Halliday was selected to play for the Scottish National Croquet Team.

This October, he is one of the members of the Scottish National Croquet team playing in the 2020 WCF Golf Croquet World Team Championship Tier 2 which was postponed from last year. Details of the tournament being held in Cadiz on the 11th - 16th October and streaming of games can be found here.   Click here to read Thomas's report from 12th October. 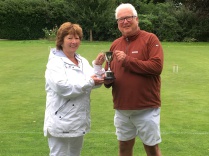 Thanks to our Club Captain David Frost for organising an excellent Chairman’s Cup on Thursday, 30thSeptember.    Despite the rain, gusty winds and then a brief interlude of sun, eight players – Frances Broadway, Ian Moore, Kim Taylor, Marian Cuckson, Nigel Owen, Thomas Halliday, Brian and Nicola – fought to win the Cup.  A tough final between Kim and Ian resulted in a 7-5 win to Ian who now becomes the latest holder of the Chairman’s Cup – many congratulations  Ian – a worthy winner.

Thanks to our Club Captain David Frost for organising an excellent 10-10 tournament today.   The 10-10 tournament saw 16 club members competing in five rounds of doubles.   The game is a variation and speedier version of GC doubles – for further details, click here for the fuller explanation.    Two groups comprising high and low handicappers, based on those attending, saw Philip Hawes win the former with five wins and Nicola Hyde the latter with four wins.

The EACF Tournaments have always been hard fought and this year was no exception - and for the Club it is was a truly a triumphant weekend (18th and 19th September) and trophies won in the GC and the B Level GC Tournaments.    Both finals were hosted by Watford and our thanks are extended to Geoff Johnson and his team for their warm welcome and assistance throughout. 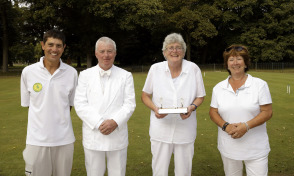 On Saturday, Enfield East were one of three finalists competing - the others being Colchester and Newport Oakes - challenging for the trophy.   Our team was led by Frances Broadway and included Michael Broadway, Nicola Hyde and Kim Taylor.   We were slightly knocked off course by a change in the usual double partnerships and the day did not start well the first doubles matches being lost.  However the tide turned, Frances and Nicola beat Newport (Colin Carr and Tim Walder) and Michael and Kim beat Colchester (Gillian Glen and Stephanie Sadler).

Four games of singles then ensued with 14 wins for Enfield out of a total of 24 games played between the three clubs.   The final score at the end of the day was: Enfield 18, Colchester 8 and Newport Oakes 6 - so very convincing!! 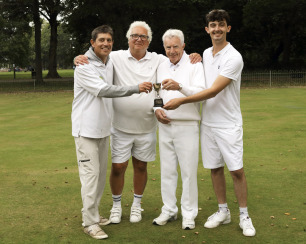 The B Level Final took place on the Sunday with the line up for the two teams as follows:

An unusual start with two sets of doubles rounds to open but no matter because Enfield won 3 out of four with David and Thomas winning both of theirs, so a great start.

The first round of singles was also won 3-1 with wins for Thomas, Kim & David to give Enfield a strong 6-2 lead

The second singles round saw Ian, Thomas and Kim win their matches to make it 9-3 on aggregate and Enfield needing just 2 more wins to lift the trophy.

Enfield would like to thank Chelmsford for an excellent sporting contest; and all credit to Ernie Bailey who had an outstanding day’s play for Chelmsford.

Enfield East, led by captain Frances Broadway, who will be going through to the EACF GC Regional Finals on Saturday, 18th September, at Watford Croquet Club where they will meet Colchester and Newport Oaks.

There was victory for Enfield West on 23rd August in their match in the EACF GC League, beating Leighton Linslade 11-7.

For those not familiar with the Tournament, the East Anglian Croquet Federation is made up of around 30 clubs mainly in Norfolk, Suffolk, Essex, Cambridgeshire, Bedfordshire and Hertfordshire.   Full details of the EACF League can be found here.

The battle for the national cup took place at Watford's Club grounds on Sunday, 5th September and saw 16 players from around the UK competing.  After six tightly fought games, Nicola Hyde successfully came through as the winner and brings home the Cup that was previously won by Club member David Hill in 2017.

On Friday, 3rd September,  Enfield played Wrest Park in a match which would decide who would win the Central & West area league and play Chelmsford in this year's GC B Level final at Watford on Sunday, 19th September.

Our team of David Barnicoat, Kim, Thomas & Ian got off to a good start by winning both their doubles matches. The first round of singles finished 2-2 with Kim and Ian winning their games. In the second singles round Thomas, Kim and David all won. Things improved even further in the next round when a clean sweep for Enfield gave the home team an unassailable lead. Only Thomas won in the final singles round but with the match won the team were entitled to relax a little.

Enfield hosted St Albans on 27th August in the EACF Beds & Herts AC League. Games were tense and all had very close results, however, we're pleased to report that we were ultimately triumphant with a final score of 4-2. The team comprised David Frost, John Street, Michael Broadway and Thomas Halliday.

A successful but long day on 19th August involving six hours play and three hours travelling to Northampton and back for our Beds & Herts AC League match. The morning doubles saw the two games ending 1-1, with David Frost and Brian Dawes winning their pairing. But after lunch both David and Brian plus Michael Broadway and Peter Brock (who only knew he was playing at 11.30 pm the night before) all won their singles matches resulting in a resounding 5-1 to Enfield. Great stuff boys!

We were delighted to welcome 12 members from the Field Dames group of the WI on the evening of Monday, 16th August 2021.   Under the watchful and informative coach, Brian Dawes, the ladies were shown the fundalmentals of the croquet game and after some useful exercises, soon embarked on their first game.   An enjoyable time was had from participants and members who assisted and we very much hope that we may see some, if not all of them again on the lawns in the not too distant future.

As a result of the Grass Roots (8+) trials held on our lawns on Thursday, 15th July and a series of closely contested matches involving Mary Grove, Frank Palmer and Frances Broadway, Nicola Hyde will be representing the Club at the National Competition on 5th September at Watford. 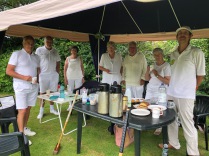 Enfield East welcomed the lovely team from Stony Stratford on 2nd August for the match which we won 13-5.   This means that whilst we are now top of the league we cannot be complacent and there is everything to play for at our next match on 13th August against Leighton Linslade.

On Friday, 6th August, Enfield West travelled to the home of Wrest Park for the latest round of the tournament and a convincing 12-6 win over the hosts.  The doubles finished one apiece but David Frost and Mary Grove with two wins each, plus Thomas Halliday with three wins and Valerie Stanley winning all four of her games saw them comfortably home by a very decent margin. 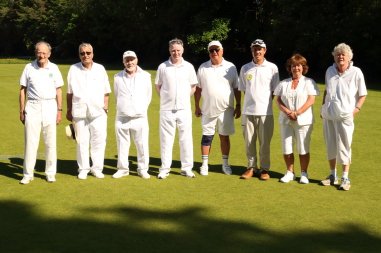 A hotly contested series of games were played on Tuesday, 1st June at Watford's grounds.  Basked in glorious sunshine it was pretty much neck and neck all day with each team winning the opening doubles and so it was until the final match.    Ultimately Watford won 10-8 but Enfield East did the Club proud.  Captained by Frances Broadway, the team was Nicola Hyde, Ian Moore and Kim Taylor.

An all-home match with Enfield West playing Enfield East was held on Friday, 28th May between Enfield East and Enfield West. For those new to the game, the Club enters two teams in this event captained respectively by David Frost and Frances Broadway - it's a real local Derby! Each team consists of four players with a combined handicap of 20. Five games were played by each of the players - one doubles and four singles. Enfield East were the overall winners (13-5). 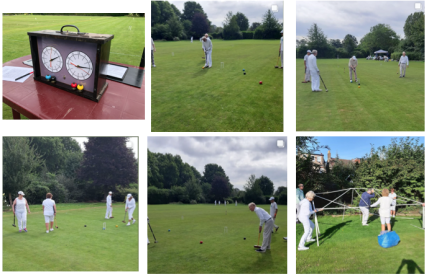 We are delighted to welcome 14 new members to the Club following the very successful three week introduction to croquet course.   We look forward to playing with them!    Members can see who these individuals are by visiting the Members Area - Gallery.

Croquet is fun, competitive, social and everyone can play on an equal level regardless of sex or age.   It’s a game of strategic thinking, skill and eye-to-ball contact and focuses on four balls, six hoops and a mallet.  It has been described a bit like snooker on grass and is great for day-to-day health and well-being.

If you are interested in learning please email Secretary@enfieldcroquet.org and we will get back to you as soon as we can.

In the meantime, please do click on this link to learn a little more about the game.   The two films on the home page also provide a useful overview of the game - and how we are able to play safely and socially-distanced. 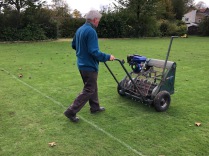 It is with many thanks to Michael Broadway's generosity that we introduce "Spiny Norman".

Described by someone as the "latest big boy's toy", the aerator is destined to become an important element of our lawn management programme.