This section falls into three categories and is a selection of links to films and articles on useful information on playing croquet, some competition games and tournaments and then things croquet related which we hope will be of interest and an enjoyable way of passing some time!

The Jargon of Croquet - undertstanding terminology

A brief look at approaching hoops in Association Croquet, focusing on the importance of playing a flat mallet croquet stroke in different areas around the hoop.

Another useful site which was created by Paddy Chapman called CroquetDev   It is a resource for learning AC however will also be of interest to GC players.    It also features an interactive croquet board!

Recommended by Amelia from the USA - https://www.playgroundequipment.com/a-beginners-guide-to-learning-to-play-croquet/

Clip of the semi between Ahmed Nasr and Chris Clarke - it shows the first 6 hoops. The match was played on a bowling green at Kelvin Grove with gale force winds so you might want to turn the sound down to avoid the wind noise - beware shaky camera work... which is why I'd like any of you out there who know of better links to let me know

Very highly recommended for new players. An excellent introduction to Golf Croquet as played by some seriously good players

An American ESPN TV link so this one is a bit cheesy with the commentary. It also however acts as a brief introduction to the game

Ask him for a demo next time you see him

Don't practice this one on the lawns please

Playing Croquet at The South Pole
And whilst the film is currently unavailable, for the Queen's Diamond Jubilee in 2012, a group of British scientists also played croquet at the Halley Research Station on the Brunt Ice Shelf, in temperatures of -30°C and winds of 40mph. 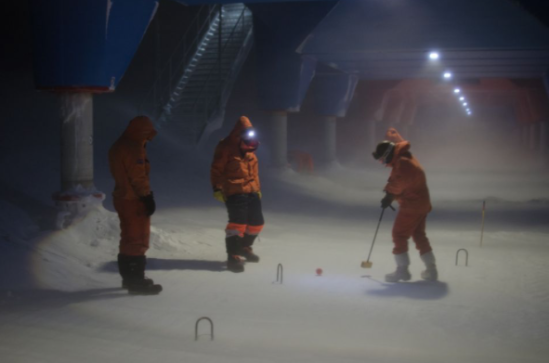